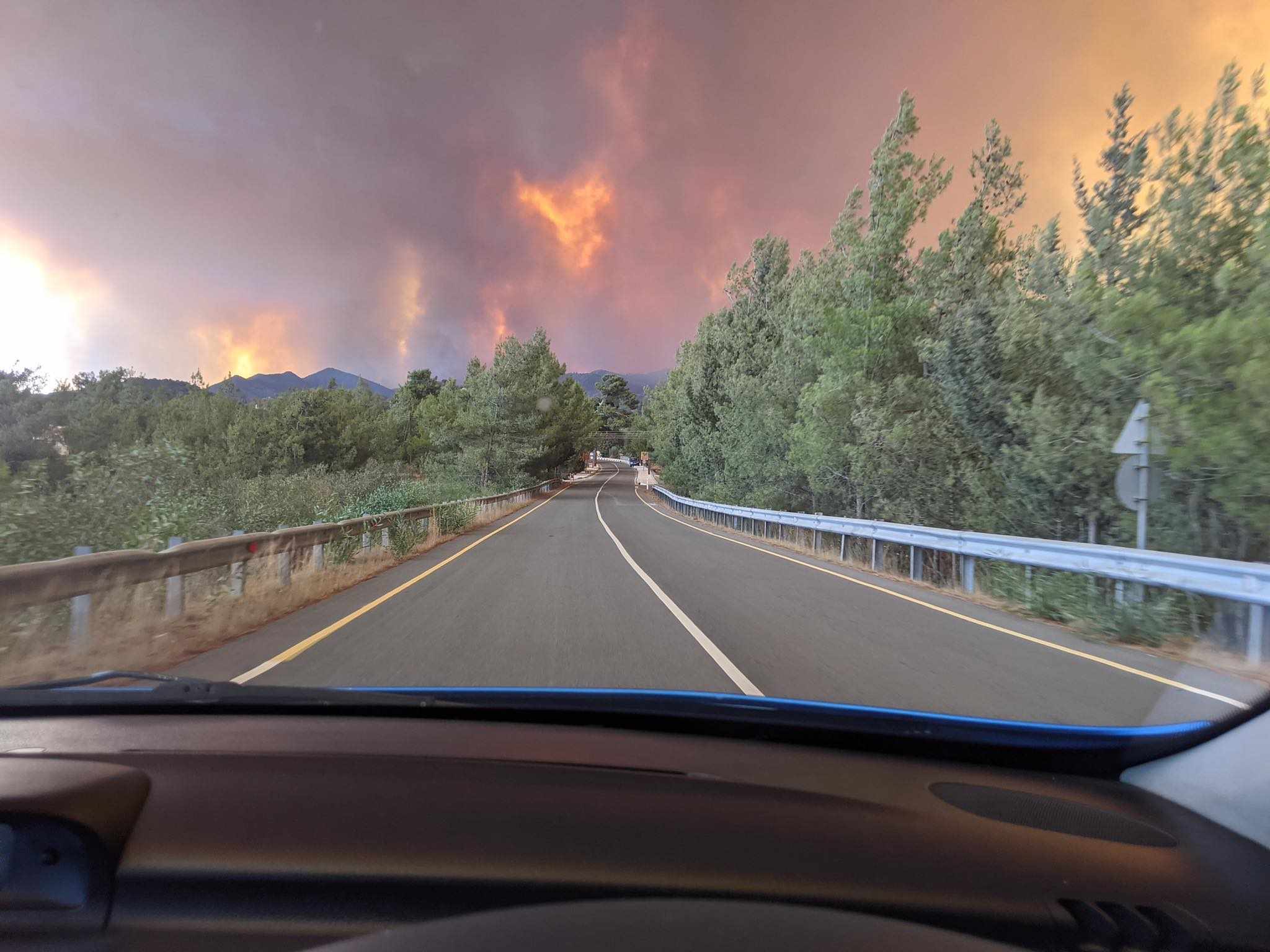 Police, firemen, forestry officials, civil defense teams, volunteers who had come from afar to help fight the fires, people evacuated from nearby villages - They all milled round the Kafestiatorion Lagias. It felt as if I was living through a real-life film set of a disaster movie. But this was no movie! Tragedy was unfolding before my eyes. Firefighters came for whole bags of bottled water and iced soft drinks to take to their colleagues. Officials paused at the oasis provided by the Kafestiatorion for some respite and to make plans. A police officer in charge of a team, briefed his men on the next day shifts (early). It had been a quiet day at the Kafestiatorion Lagias, but I had called my assistant from Ora to man the shop whilst I went for a rapid test in Zygi. (My usual test centre in Scarinou had not been operational in the morning). I was waiting for the test result when my phone rang. It was my assistant. “Mr Vassili - Ora and Mellini are on fire,” she screamed in panic. “Villagers from Mellini are milling around in distress. Mrs Areti (our community leader) has offered them drinks. More people will be coming. I have to go back to Ora as soon as possible. Come back quickly. You are needed here.” “Why am I racing towards out-of-control forest fires?” The thought crossed my mind. “Because I am the captain of my restaurant and it is my duty to be there.” I arrived. Anguish, sadness and worry was written on people’s faces. Cars were coming through from Ora. My assistant positioned her car to leave, but was slumped in despair over the steering wheel because her children were not in the cars coming from Ora.

They arrived eventually and took her in their car. Her face came back to life as she hugged them. Her son said that the houses all around hers had been burned, but hers was mainly intact. It was announced that we might be evacuated from the village and to be ready. I walked home to fetch the chargers to my phone and i-Pad. Then messaged a friend to ask to stay the night in his sitting room if we were evacuated. I asked a fire fighter if we would be told to leave. “I don’t know,” he said. “It all depends on the wind. At the moment the fire is moving in the other direction towards Machairas.” More and more official(and private) cars arrived on the scene as the emergency services were galvanised into action. The kafestiatorio was living up to its description inscribed at the entrance: “Community Centre of Lagia”. Till very late the Community Leader sat sadly at the entrance, making sure that traditional Cypriot village hospitality was offered. She would periodically point to a new group of firefighters arriving for some respite. “Ask them what they want to drink. Don’t take any money. Make a note. The village will pay.” By midnight it looked as if the fires were under control and we might be able to get some sleep. However, we were not out of danger yet. A wrong gust of wind could make things flare up again.

I asked how we would know if we did have to evacuate. “I will phone you all,” she said. “Keep your phone next to you”. I eventually locked up at 1.30 am. I tried to go to Choirokitia at 7.30 am to restock with bottled water. A huge police block stopped my path. I explained my mission. They said, “You can come out, but you won’t be allowed back in.” I turned back and opened up. My first customers were a couple from Limassol. All their properties had been stolen when the Turks invaded the North. They had rebuilt themselves and  had a country home close to Lageia. That was now gone too. Helicopters were dropping water all day as a preventive measure to dampen embers on the ground. They were assisted by firefighter planes from Greece, Israel and, I think, Italy. All in all 55 square kilometers of incredibly beautiful countryside had been destroyed in a day. According to the Guardian, ten villages were evacuated, 50 homes were destroyed, and four Egyptian farm labourers were killed. A sixty seven year old farmer has been remanded in custody under suspicion of having caused the fire.