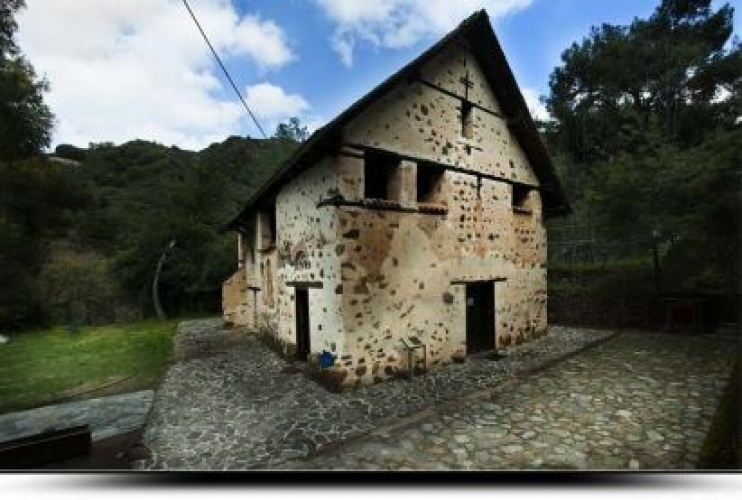 The church of Ayios Nikolaos tis Stegis is situated in a central area of the Troodos mountain range, in the upper Solea valley. It is built on the west bank of the river Klarios/Karkotis, at a distance of about two kilometers southwest of the village of Kakopetria. In 1985 it was inscribed on the UNESCO World Heritage List which includes nine other painted Byzantine churches of the Troodos range.

Agios Nikolaos tis Stegis is the only surviving katholicon (monastery church) of an 11th century Byzantine monastery in Cyprus. The church itself is dated to the 11th century, whilst the earliest written sources that mention the monastery are dated to the end of the 13th or the beginning of the 14th century. This monastery flourished from the Middle Byzantine period up to the period of Frankish rule. It declined during the 18th century and ceased to function as a monastery by the end of the 19th century. Ever since, it seems to have functioned as a simple country church and a pilgrimage site. Apart from the church, no other monastic buildings survive today.

The church is a domed cross-in-square structure and was originally without the narthex or the timber roof which covers both the nave and the narthex. This later steep-pitched roof, which carries a type of flat tile common in the area of Troodos, gave Agios Nikolaos the nickname 'of the Roof' ('tis Stegis') at least since the 13th century. The narthex was added at the beginning of the 12th century, whilst later additions and alterations changed the original appearance of the church and often resulted in the destruction of significant wall-paintings.

The interior of the church is decorated with frescoes belonging to various periods, which cover a time span of over 600 years. The This entirely painted church has justly been described as a museum of Byzantine painting. oldest phase of the mural decoration is dated to the 11th century and it is the most important set of wall-painting which survives on the island from this period. The paintings include scenes from the Dodekaorton (the life of Jesus), the Raising of Lazarus, the Dormition of the Virgin Mary, isolated figures, etc. The next phase is dated to the 12th century and it includes wall-paintings from the southwest part of the church, the narthex and elsewhere. The composition of the Forty Martyrs and the figure of Ayios Nikolaos are worth mentioning.

Most of the mural decoration of the church is dated to the 14th century. The Crucifixion and the Resurrection belong to the end of the 13th-beginning of the 14th century, whilst the Christ Pantocrator on the dome, the Prophets on the drum of the dome and the Evangelists on the four pendentives date to the 14th century. In the nave and the narthex there is a group of life size saints dated to the same period. The larger than life-size of the military Saints Theodore and George on the northwest pier are particularly impressive. Later, in the 14th century, the apse and the east and south vaults were redecorated. Some of these frescoes are now exhibited in the Byzantine Museum of the Archbishop Makarios III Foundation in Lefkosia. The same Museum also houses some significant portable icons from Agios Nikolaos the Stegis.

The last phase of the wall-paintings is dated to 1633 and it includes the Apostles Peter and Paul, who decorate the east piers supporting the dome, near the iconostasis which is also dated to the 17th century.

Entrance fee: Free
Disabled Access: Wheelchair accessible.
Hours of operation and entry price are subject to change without notice. It is advisable for visitors to confirm them before their visit.