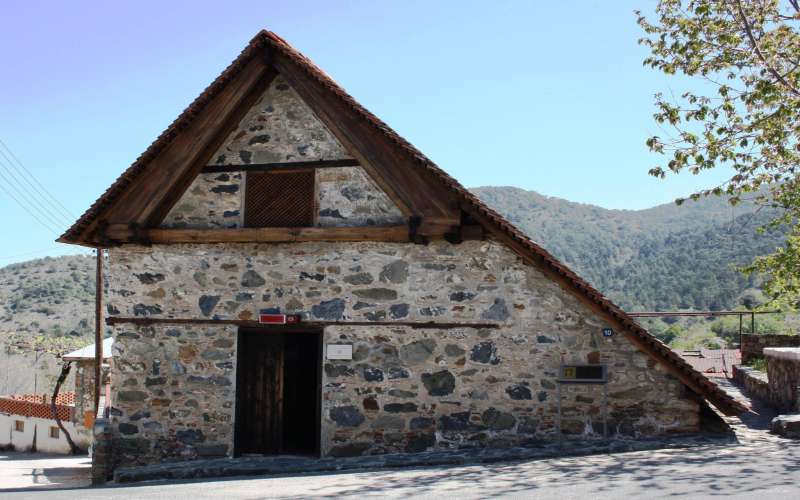 The church of Archangel Michael is situated in a central area of the Troodos mountain range, in the valley of Marathasa, in the village of Pedoulas. In 1985 it was inscribed on the UNESCO World Heritage List which includes nine other painted Byzantine churches of the Troodos range.

According to the dedicatory inscription above the north entrance, the church was built and decorated with frescoes in 1474, with the donation of priest Vasilios Chamados. The priest, accompanied by his wife and two daughters, is depicted above the dedicatory inscription, offering Archangel Michael a model of the church.This church belongs to the typical single-aisled, timber-roof type of the Troodos region. The narthex, which extends to its south and west side, was used as a loft due to the small size of the church. The loft was used by the women, while only men entered the main church.

The church of Archangelos Michail is one of the few churches in Cyprus which preserves the name of the artist who decorated it. His name was Minas and he was a local painter who came from the area of Marathasa. Minas was a typical “naïve” painter with a conservative style, and followed the Byzantine tradition. However, he was aware of the artistic trends of his time and place which explains the influx of western elements in his work. During this period many contemporary churches were decorated with wall-paintings of the same style.

The wooden templon screen is worth mentioning, which also dates to 1474, with painted decoration consisting of coats-of-arms. It is one of the best-preserved examples of the kind in Cyprus. On the epistyle one can notice the painted coats-of-arms of the medieval Kingdom of Cyprus. Next to it is the double-headed eagle, the emblem of the Palaiologan dynasty, the last kings of the Byzantine Empire.

Only a few metres to the west of the church of Archangelos Michail, in a specially arranged room of the old primary school, a collection of portable icons and other objects of mainly religious art are kept. These come from the Byzantine churches of the village of Pedoulas, and are dated from the 13th to the 20th century.