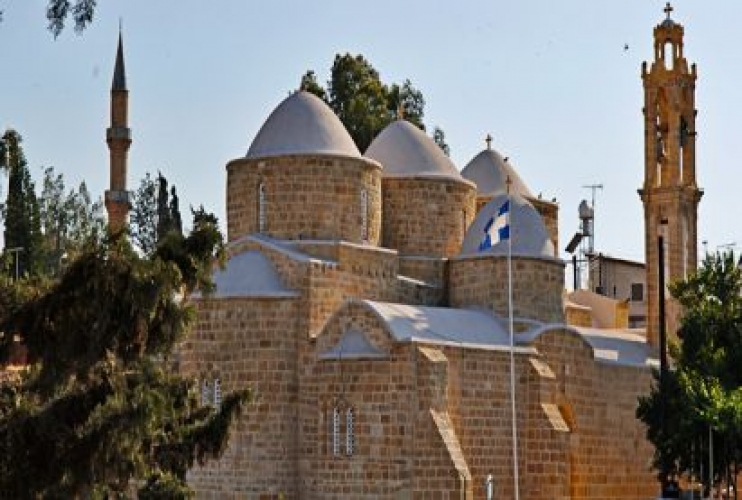 Church of Agios Varnavas and Ilarionas (Saints Barnabas and Hilarion)

The church of Agios Varnavas and Ilarionas (Saint Barnabas and Hilarion) is built on the west bank of Serrahis’ tributary river, Peristeronas, of the homonymous village.  Along with the church of Agia Paraskevi of Geroskipou, they constitute the only five-domed churches of Cyprus. The church of Agios Varnavas and Ilarionas, is dated to the end of the 11th - beginning of the 12th century. It is quite possible that it replaced an earlier church, which probably belonged to the type of the three-aisled, barrel-vaulted basilica. In 1959, during the course of restricted excavation work in the church’s interior, a semi-circular synthronon was found within the apse, along with the base of a templon screen. Part of the original church’s north wall still survives, incorporated in the western part of the wall of the existing church.

The church belongs to the type of the three-aisled, barrel-vaulted basilica. The narthex is a later addition with contemporary repairs. The church’s belfry was built in the 19th century. The oldest wall-painting samples belong to the 15th and 16th century. The 16th century altar-doors of the iconostasis also survive. The plaster fragments of the templon screen belonging to the church’s first architectural phase, dated to the Middle Byzantine period, are on display in the narthex.

Admission: Free
Opening and closing times are subject to alterations without notice. Visitors are advised to check before visiting.

Tip: You can relax, unwind and drink your coffee in the Cafe which is located just beside the Church.