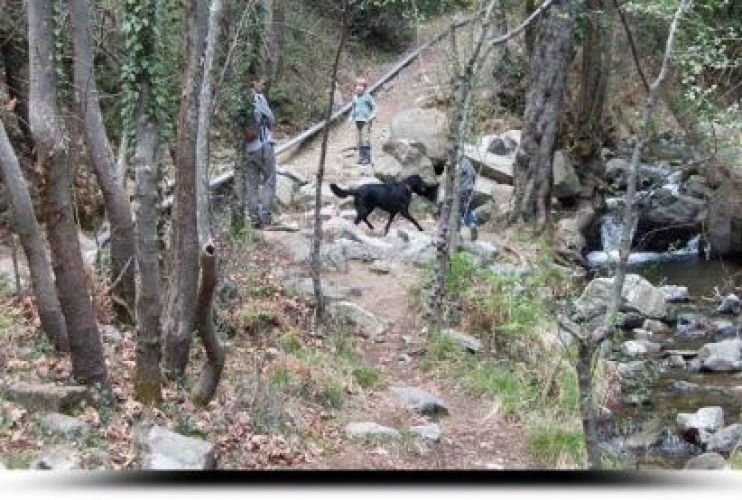 This is a lovely but quite long Cyprus Troodos circular walk starting from outside of Platres which goes out via Pouziaris and Troodos and back. One advantage of walking in Cyprus and when up in the Troodos Mountains - especially in the Summer - is that the temperature in the mountains is considerably lower than that found down near the coast and beaches. A 28 degree day in Pafos can easily become - once up the Troodos Mountains - maybe 20 or so degrees. Of course it then follows that you should recognise thatthese are mountains and you should have the necessary clothng with you in case of a sudden weather change. This circular walk has a bit of a climb of around 600 metres at the start but then becomes much easier - total distance approximately 17.5kms. The walk starts just outside of Platres on the main road to Troodos at the Psilo Dendro Trout Farm/restaurant where there is a small car park.

Turn left out of the car park and almost immediately turn left again onto the signposted forest road to Mesa Potamos. Locate the Nature Trail Board which indicates the Pouziaris trail and take the small path to the left of it which heads up into woods. Stay on this rising path as it passes near a viewpoint bench on the right and then reaches a dirt road. Cross over the road and continue on the path which is almost opposite - the path continues climbing and zig zagging. At a path junction with a sign indicating "Psilo Dendro 1km" turn left onto an old mule track. Soon cross another forest track and go on up the path opposite - sometimes there are quite steep drops on the left - certainly there are very good views too.

Around 2.5kms from the start turn right on a path which winds really steeply uphill through the forests to reach the top of Pouziaris. There is a bench seat here but the steel pylon mentioned in several walking books is an ex-steel pylon - i.e. not there. From the top continue along and soon pass another bench/seat and at the nearbye signpost continue straight ahead crossing a ridge and heading towards the golf course (I mean golf balls). You eventually join a very rough dirt track - go ahead on this climbing steeply to reach a signposted track junction - go left and continue as the track winds through woods and soon the security fences from the military camp appear on the right.

Follow the track to arrive at a tarmac road - St-George-in-the-Forest church is on the left and the entrance gates to the camp are a little further on to the right. Turn right at the church and follow the tarmac road past the camp gates to soon reach the outskirts of Troodos. Just as you enter Troodos look out for the Nature Trail Board on the right which indicates the start of the Persephone Trail. Take this trail - it's a narrow path and goes fairly level for a while through pine trees as it heads towards and then bears to the left of the previously passed military camp. Stay on this path as it slightly undulates along through the woods and fairly soon you get magnificent views of the asbestos mine workings down on the left.

These massive workings have hardly anything growing on their bleak surface and really scar the otherwise great countryside. The path passes an area where there are several seats and then just keeps going along through the forest eventually to reach a track crossroads. Go straight across and about half a kilometre along you reach the view point at Makrya Kontarka. There are several seats here and this is an ideal stopping place for lunch - and the views are excellent.

Walk back to the track junction, now turn right and follow the track and then quite soon go right again at the next track junction [N34 54'36.60 E032 53'46.38] now heading towards Vryses. You again soon get more views of the asbestos mines on the left but then the track curves away to the right through a cut and then from here you have good views down to the left of the heavily forested valley below. Now the track starts it's descent - ignore a turn off to the left which goes to Mesapotamos, instead continue along the main track as it winds down the side of the valley. The track hooks back left tightly at a rock face as it crosses a stream bed. There are several tracks and paths which join along here - follow the signs for Vryses and Platres at the various junctions.