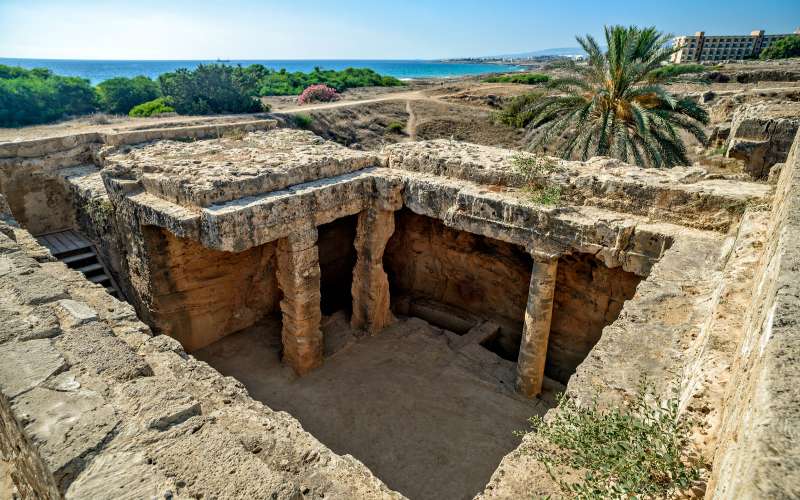 Tombs of the Kings

They are important and majestic!

The 'Tombs of the Kings' is the impressive necropolis that is located just outside the walls, to the north and east of Pafos town. It was built during the Hellenistic period (3rd century B.C.) to satisfy the needs of the newly founded Nea Paphos. Its name is not connected with the burial of kings, but rather with the impressive character of its burial monuments. The 'Tombs of the Kings' was the place where the higher administrative officers and distinguished Ptolemaic personalities as well as the members of their families were buried. There is sufficient evidence to support the fact that the first Christians also used the site for their burials, while at the same time the site constituted an endless quarry. Squatters established themselves in some of the tombs during the Medieval period and made alterations to the original architecture.

Most of the tombs are characterised by an underground, open aired, peristyled rectangular atrium completely carved into the natural rock. Columns or pillars of the Doric style supported the porticoes, which surrounded the atrium. The burial chambers and the loculi for single burials were dug into the portico walls. It seems that the walls were originally covered with frescoes although today only small fragments are preserved. Some of the tombs imitate the houses of the living, with the burial chambers opening onto a peristyle atrium. They are similar to tombs found in Alexandria, demonstrating the close relations between the two cities during the Hellenistic period.

The famous ‘Tombs of the Kings’ form part of the Archaeological Park of Kato Pafos - one of the most important archaeological sites of Cyprus that has been included in the UNESCO World Heritage Sites list since 1980.