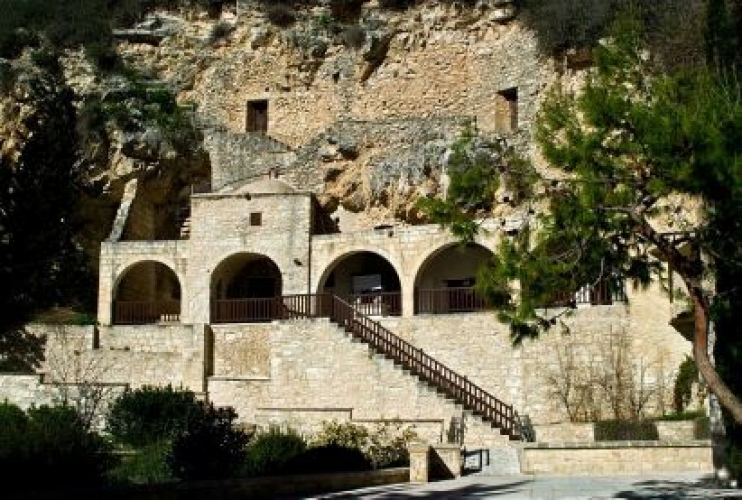 It is one of the most famous monasteries in Cyprus

The Engleistra and the Monastery of Agios Neophytos are situated near the village of Tala, about 10 kilometres north of Nea Paphos. The Engleistra was initially a natural cave on the eastern side of a hill’s slope. In front of the hill lies a deep gorge, at the end of which flows a torrent. Inside the Engleistra, Saint Neophytos led a hermit’s life.

Saint Neophytos turned the natural cave into a place of seclusion which consisted of two areas. One area was a small chapel dedicated to Timios Stavros ( Holy Cross) and the other was the Saint’s cell, in which he also carved his tomb. His cell communicated with the church’s bema. He confined himself in the Engleistra until 1170, when he was ordained priest by the Bishop of Pafos, Vasilios Kinnamos, spreading his fame throughout the island. Many monks gathered around him, forming a monastic community, but the Saint’s need for serenity and seclusion led him to carve another Engleistra higher on the rock, above the old chapel. He carved another small chapel dedicated to Agios Ioannis Prodromos (Saint John the Baptist) next to his new cell.

From the monastic structures of the earlier monastery only the little chapel of the Engleistra with the narthex and the sacristy over it, the Saint’s cell with his tomb and the refectory, still survive. Higher on the hill, there exists the Saint’s later cell and the chapel of Agios Ioannis Prodromos. The katholikon of the Monastery of Agios Neophytos was probably built in the beginning of the 16th century and belongs to the type of the barrel-vaulted, three-aisled, domed basilica. The original church was completely decorated with frescoes. However, a large part of them was destroyed during the period 1585-1611.