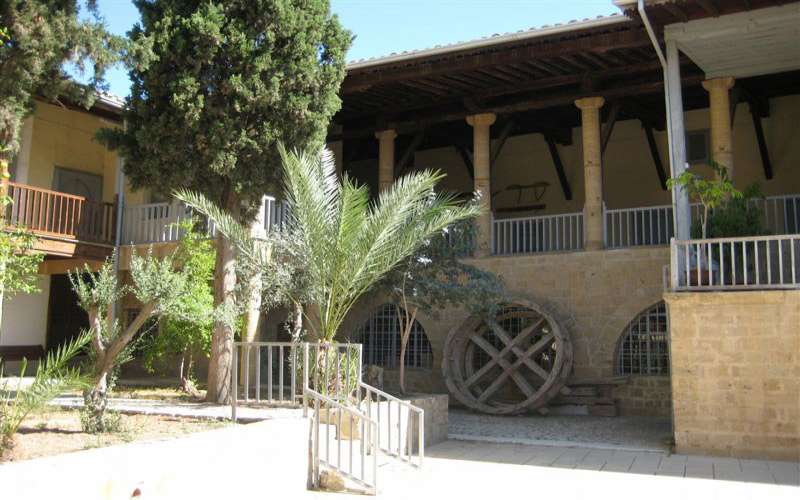 The Cyprus Folk Art Museum was founded by a few keen members of the Society of Cypriot Studies in 1937 and it is housed in the premises of the old Archbishopric Palace. In 1961 the seat of the Archbishop of Cyprus was moved to the new palace. The Society then approached the Archbishop who graciously handed over the whole of the premises of the Old Archbishopric to the Society, to be used for its activities. It was at that time from 1962 to 1964 that extensive reconstruction of the building was carried out, at the very great expense of the Society with the help of His Beatitude Makarios III.
The building of the Museum dates back to the 15th century and is Gothic with earlier additions. In the beginning of the 13th century, the area was French (Latin) and was used as a monastery by the order of the Benedictines. Besides, the Order of St. John-Hospitaliers built a church in honour of St. John, their patron saint. Hugo 1st was buried here in 1218. The Greek Orthodox Church began using it sometime before the Ottoman Occupation (1571-1878). The richly decorated Gothic arch with the 16th century fresco of the Annunciation, which bears the end of a Greek inscription was uncovered in 1950. The fresco was conserved in 1995 by the Society and the Department of Antiquities.
Many of the items of this museum were donated, others were bought either directly from the villagers or from private collections. Most of the items were made in areas that are now occupied by Turkish troops. Samples of weaving, pottery, embroidery, lace, costumes, metalwork, woodcarving, basketry, leather work, native painting, agricultural and weaving tools are to be found in the museum collections. An important item is the door of St Mamas Church, that inspired the novel poet George Seferis. The poet refers to the little owl of the door on his poem “Little things of Cyprus”. The poem is dedicated to his friend and first Director of the Museum, Adamantios Diamantis. Very special paintings are two wall paintings of a coffee shop from a village called Geri, that depict a hero of the Greek Revolution against the Turks in 1821, called Athanasios Diakos and a very famous athlete, called Panagiotis Koutalianos, who was famous of his power and his exhibitions all over the world. Two other important paintings are those of M. Kassialos, ‘The wedding’ and A. Stylianou. ‘Lapithos’. Both paintings depict Cypriot customs and traditional works. Today the number of items of the Museum catalogued is over 5000.
During 1955-1959 troubles, the Museum was forced to close in three different occasions. Also, in the summer of 1974 when the Turkish invasion took place, the collection was transported to safer areas and the Museum was closed for over a year’s period. Though, the adventures were not over. The artefacts needed immediate conservation, the roof of the building was about to collapse and the humidity was causing irreparable damage to the exhibits. In 1990 His Beatitude Archbishop Chrysostomos generously offered to cover the expenses and thus, extensive repair work took place that was finished in April 1996 when the new exhibitions in the ground floor opened for the public.
In June 1999, the Silk Industry Exhibitions were inaugurated in the first floor of the building. The old Archbishopric is situated in the square named after Archbishop Kyprianos who was hanged by the Turks in 1821 with the commencement of the Greek Revolution, so that it would not spread in Cyprus that it was under Ottoman rule as well as the Greek mainland. Kyprianos was actually taken from a room in this building to the place of his martyrdom. On the first floor there is the room which was used by him and is known by his name. Across the street is the Pancyprian Gymnasium, the oldest and largest gymnasium in Cyprus, which is the continuation of the Greek school founded by Archbishop Kyprianos in 1812 and dedicated to the Holy Trinity.
The museum has a rich shop with traditional handicrafts and also small gifts inspired of tradition woven bookmarks, shadow theatre figures, jewellery and books concerning Cyprus archaeology, tradition etc. You can also try traditional drinks like soumada (made of almond), rosewater and Cypriot coffee. For groups they can offer traditional homemade pies, made in satzi and pourekkia (a pie with white cheese).
Volunteers are accepted to work in the museum, as the organisation is based in volunteerism since 1937.