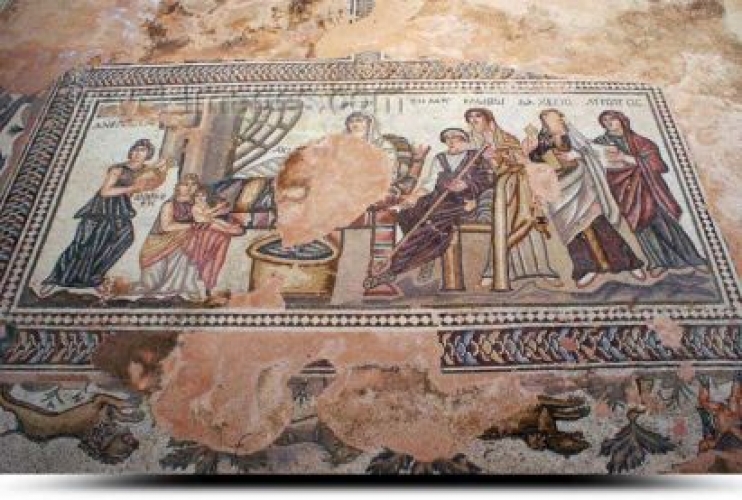 It is on the list of UNESCO World Heritage Sites

The first house was discovered accidentally by a farmer in 1962 and systematic excavations at Nea Pafos followed by the Department of Antiquities during which many of the ancient town´s administrative buildings as well as private houses and ecclesiastical buildings came to light such as the House of Dionysos, Theseus, Aion and Orpheus. The mosaic floors of these houses date from the 2nd to the 5th Century AD.

The House of Dionysos: This rich building belongs to the Greco-Roman type where the rooms are arranged around a central court, which functioned as the core of the house. It seems that the house was built at the end of the 2nd century A.D. and was destroyed and abandoned after the earthquakes of the 4th century A.D. The House of Dionysus occupies 2000sq. metres of which 556 are covered with mosaic floors decorated with mythological, vintage and hunting scenes. At the House's entrance these is a pebble mosaic representing the mythical sea-monster Scylla that belonged to a Hellenistic building found below the later Roman one.
The House of Orpheus: It belongs to the type of the wealthy Greco-Roman Houses with a central court similar to the House of Dionysus. It dates to the late 2nd /early 3rd century A.D. The building´s main room, the reception hall, is decorated with a mosaic floor depicting Orpheus among the beasts. The next room´s mosaic floor bears two panels, one representing Hercules and the Lion of Nemea, and the other an Amazon with her horse.
The Villa of Theseus: The villa was built in the second half of the 2nd century A.D. over the ruins of earlier houses of the Hellenistic and early Roman periods and was in use until the 7th century AD. The villa's large size, it consisted of more than 100 rooms, suggests that the building was the residence of the governor of Cyprus. Many of the rooms and three of the four porticos around the central court are covered with mosaic floors with geometric motifs. Three rooms in the south wing of the building are embellished with mosaic floors with human representations, all belonging to different phases. The oldest one is the mosaic representing Theseus and the Minotaur, dating to the very end of the 3rd or beginning of the 4th century A.D. with obvious later restorations, probably made after the earthquakes of the middle of the 4th century. At the end of the 4th century A.D. a new mosaic depicting Poseidon and Amphitrite was added to a room, which probably served as a bedroom. Finally, at the beginning of the 5th century, a mosaic floor was laid in the reception room, of which only a part is preserved today and depicts Achilles´ first bath.
The House of Aion: Only part of the house has been excavated so far. On the floor of an apsidal room, lies the most spectacular mosaic of Pafos dated from the middle of the 4th century A.D. The mosaic, which is of excellent quality, consists of five figural panels depicting the newborn Dionysos, Leda and the Swan, the beauty contest between Cassiopeia and the Nereids, Apollon and Marsyas, and finally the Triumph of Dionysos.

Owners of the Green Hill tavern