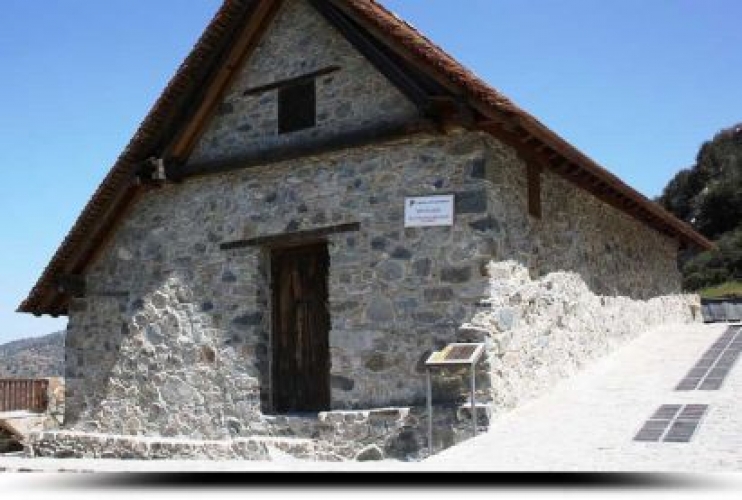 It is the only certainly dated 13th century monument

The church of Panagia is situated in a central area of the Troodos mountain range, in the valley of Marathasa. It is located on a hill above the village of Moutoullas. In 1985 it was inscribed in the UNESCO World Heritage List, which includes nine other painted Byzantine churches of the Troodos range.

According to the dedicatory inscription on the north wall of the Holy Bema, the church was built and decorated with frescoes in 1280, with the donation of Ioannis of Moutoullas and his wife Irene. Both of them are depicted holding a model of the church. It is therefore possible, that the Church of Panagia tou Moutoulla was a private chapel.

The church belongs to the well-known architectural type of the single-aisled, steep-pitched timber roof of the Troodos region. The narthex was added at a later stage, after the beginning of the 16th century, and it extends to the west and north sides the church. The timber roof also covers the narthex.

As far as the mural decoration of the church is concerned, it is worth noting that it is the only series of wall-paintings of the thirteenth century (1280) which survive in Cyprus that can be dated with precision. Due to the small size of the church, the iconographic programme was reduced accordingly. It must be noted that the donors are faithful to the orthodox tradition, without ignoring their contemporary world, a fact that becomes obvious when one notices the repertoire. It is in any case a remarkable set of wall paintings.

Both the style and the iconographic programme of the painter are of great interest. His style is a mixture of older 12th century Byzantine characteristics, with elements from his contemporary western art. He also uses elements from the painting developed in the crusader lands of the East, in Cappadocia, Crete and generally in remote Greek lands. Some of these characteristics can also be seen in Apulian hermitages and the Calabrian churches of South Italy. The exterior of the north wall of the church was decorated at the end of the 15th or the beginning of the 16th century with a scene from the Last Judgement.