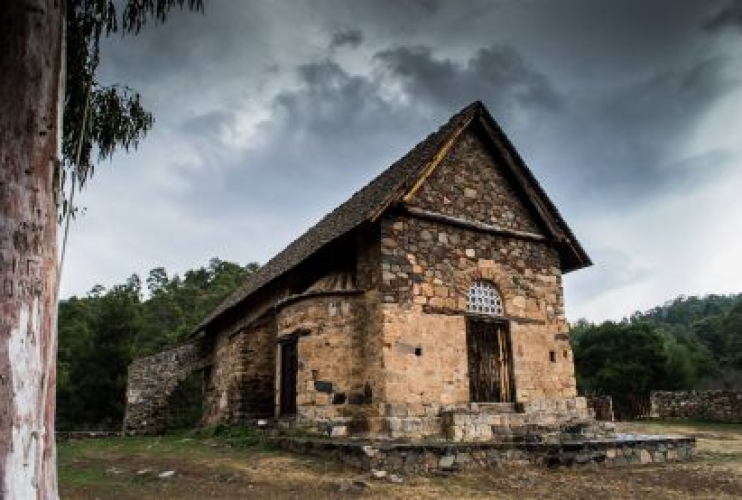 In 1985 it was included in the UNESCO World Heritage List

The church of Panagia Phorbiotissa, better known as Panagia of Asinou, is situated in the north foothills of the Troodos mountain range. It is built on the east bank of a stream, three kilometers south of the village of Nikitari. In 1985 it was inscribed on the UNESCO World Heritage List, which includes nine other painted Byzantine churches of the Troodos range.

Panagia Forbiotissa used to be the katholicon (monastery church) of the Monastery of Forbion, as its name implies. According to the dedicatory inscription above its south entrance, which is dated to 1105/6, the church was built with the donation of Magistros Nikephoros Ischyrios, who subsequently became a monk with the name Nikolaos. The monastery was founded in 1099 and it functioned until the end of the 18th century, when it was abandoned.

The church consists of two parts: the vaulted single-aisled nave and the narthex, which is a later addition belonging to the second half of the 12th century. The narthex with its two semi-circular apses belongs to a type directly influenced by Constantinople. Already from the 12th century a steep-pitched timber roof, covered with flat tiles, sheltered the church. Today no traces of the rest of the monastic buildings survive.

The interior of Panagia Forbiotissa is entirely covered with wall-paintings, which vary in date. The earliest group is dated to 1105/6 and it expresses the (then) latest style of the Comnenian period. These frescoes reflect the art of Constantinople, which is thought to be the artist's birthplace, and they are one of the most important groups of Byzantine art of this period. The strong influence of the Empire's capital can be explained by the fact that the prevailing geopolitical conditions of the time led Alexios Comnenos I (1081-1118) to render Cyprus his most important military base of the south-eastern Mediterranean.

Many of the original wall-paintings, dated to 1105/6, are preserved in the apse of the Holy Bema and the west wall of the church, which must have often suffered great damages especially from earthquakes. During the 14th century, for instance, the conch of the apse collapsed and was soon after rebuilt and redecorated. At the same time the external buttresses were added and a little later, the flying buttress at the eastern end of the north wall was built.

The narthex was decorated with mural paintings soon after its erection during the second half of the 12th century, and in 1332/3 it was redecorated following strong Frankish influences. In its iconographic programme, we distinguish the large number of donors.
In the same church there are also some later frescoes, dating to the 17th century.
Opening Hours: Weekdays and Saturdays 09:30-16:00 (until 17:00 in Winter)
Sundays and public holidays 10:00-16:00
Accessibility for disables: Yes
Admission: Free