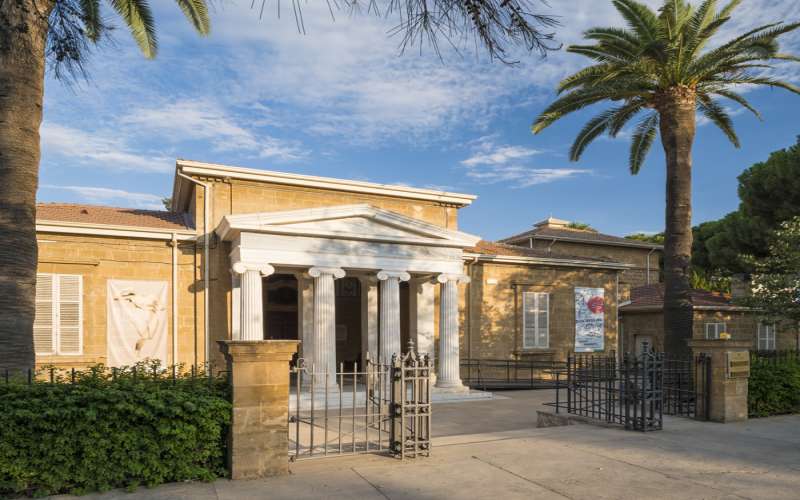 Outlines the long history of the island's civilization

The Archaeological Museum of Lefkosia consists of fourteen rooms surrounding a square central area and is comprised of offices, a library, storerooms and areas for preserving and studying items in the collection. The objects in the rooms follow a chronological and a thematical succession. On the right side of Room I a series of objects (tools, stone vessels and figurines) is presented, which constitute the earliest evidence of human presence on the island during the Neolithic period.  The following two rooms contain pottery. Room II is dedicated to the rich collection of pottery of the Early Bronze Age while in Room III reference is made to the evolution of pottery from the Middle Bronze Age to the Roman period. In Room IV hundreds of clay figurines and statues are displayed that were found around a circular altar in the Archaic sanctuary at Agia Irini. The evolution of the strong Egyptian and Assyrian influences of the statuary from the Classical period is on display in Room V.

The later phase of Cypriot statuary, dated to the Hellenistic and Roman periods, is exhibited in Room VI where we find mainly marble and bronze statues. In the centre of the room, the bronze statue of the Roman emperor, Septimius Severus constitutes the main exhibited work of art. Room VII is divided into three sections. The first one is dedicated to the rich collection of bronze objects which reflect the wide use of this material, for which Cyprus was famous in antiquity. In the central section of the room specimens from the museum’s rich collection of seals and coins are on display, which represent all the mints of the Cypriot kingdoms as well as the mint during the Ptolemaic rule on the island.The last section of the room contains gold jewellery, silver vessels, glass objects and lamps dating from the Early Bronze Age to early Christian times. Room VIII, which is on a lower level under the stairs leading to the metallurgy room, has been specially modified to receive a reconstruction of tombs dating from the 4th millennium to the 4th century B.C.  Room IX contains grave monuments such as carved grave stele, painted clay sarcophagi and limestone sarcophagi decorated with carvings.

Opposite, in Room X, we find a retrospection of the evolution of writing in Cyprus. Room XI is on the first floor and hosts magnificent finds from the royal tombs of Salamis, such as the bed decorated with pieces of ivory and coloured glass, the two thrones and a bronze cauldron supported on an iron tripod and decorated around the edges with four busts of sirens and eight griffins. Room XII is dedicated to ancient metallurgy. Through the disposition of the finds, which bear an educational character, we can follow the process of the mining and smelting of copper as well as metalworking.Sculptures that decorated the gymnasium in Salamis during the Roman period are on display in Room XIII, on the ground floor. Finally, the important production of clay figurines dating from the Early Bronze Age until the Roman period is represented in Room XIV following a thematic order.