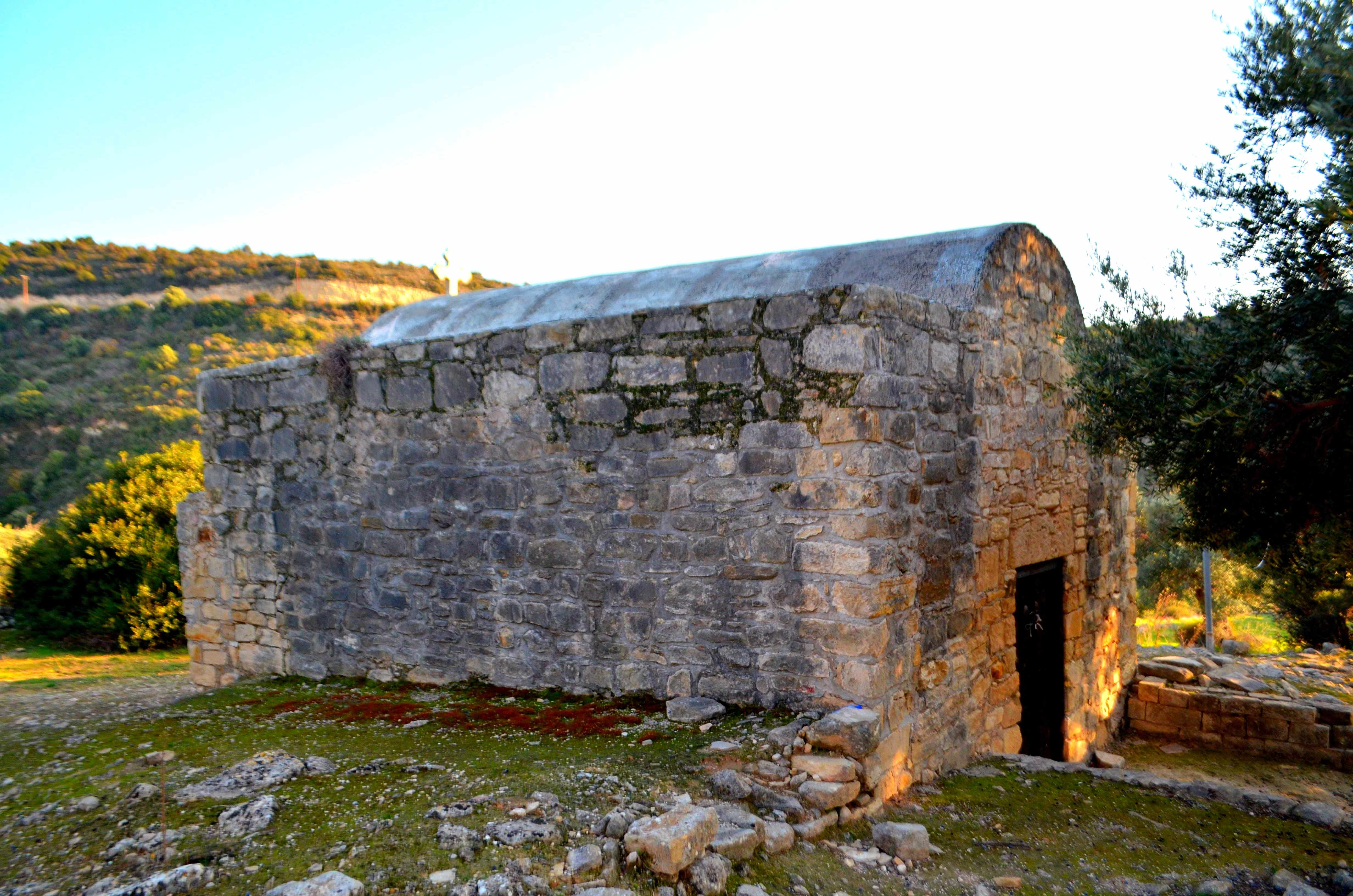 Starting our journey to discover and explore historical monuments we found ourselves in the chapel of Saints Constantine and Helen.

Going on the road Kouklia - Archimandrita and a little below the imposing wind turbines, which swirl incessantly, of the wind farm in the mountain range Orites, on the left side of the road and on an inaccessible slope one meets this chapel which dates back to the 5th century AD. 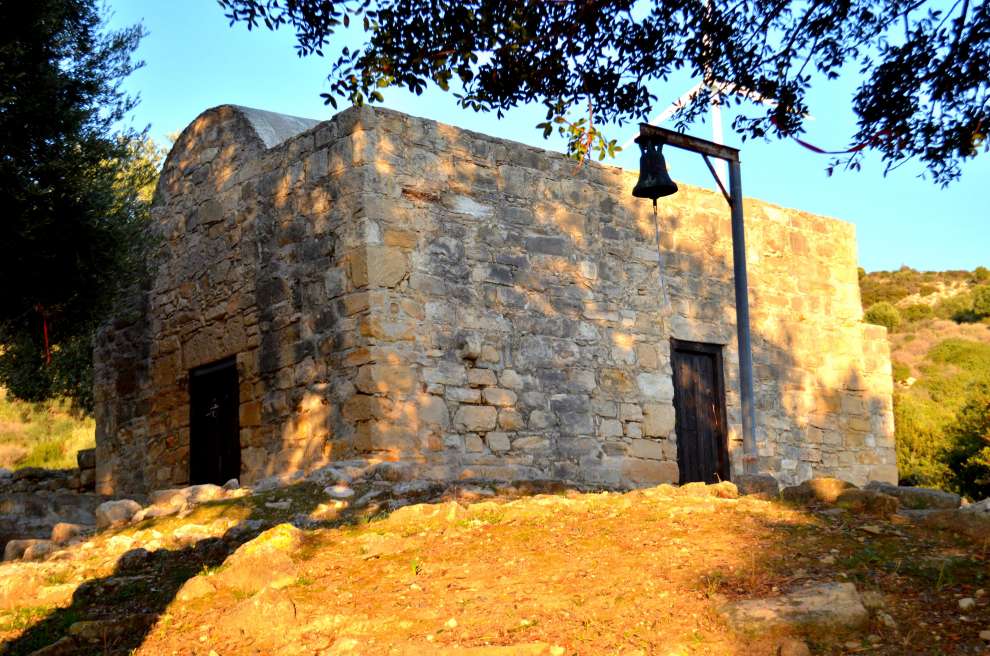 Built of hewn limestone, in the shape of an arched basilica, the church still stands in its original position. The semicircular arch of the roof is covered with cement mortar. The 70 cm wide external masonry as well as the 80 cm of the external pillars prove to be strong in the passage of so many centuries and still support the whole building that looks like a gallery inside.

Inside, the church seems to have been completely decorated with hagiographies which, however, have been almost completely destroyed.The floor is paved with irregular limestone slabs.The temple has no iconostasis except for some icons which are placed in small recesses of the pillars.In the place of the Holy Altar there are equal slabs placed one on top of the other where one dares to create an altar. 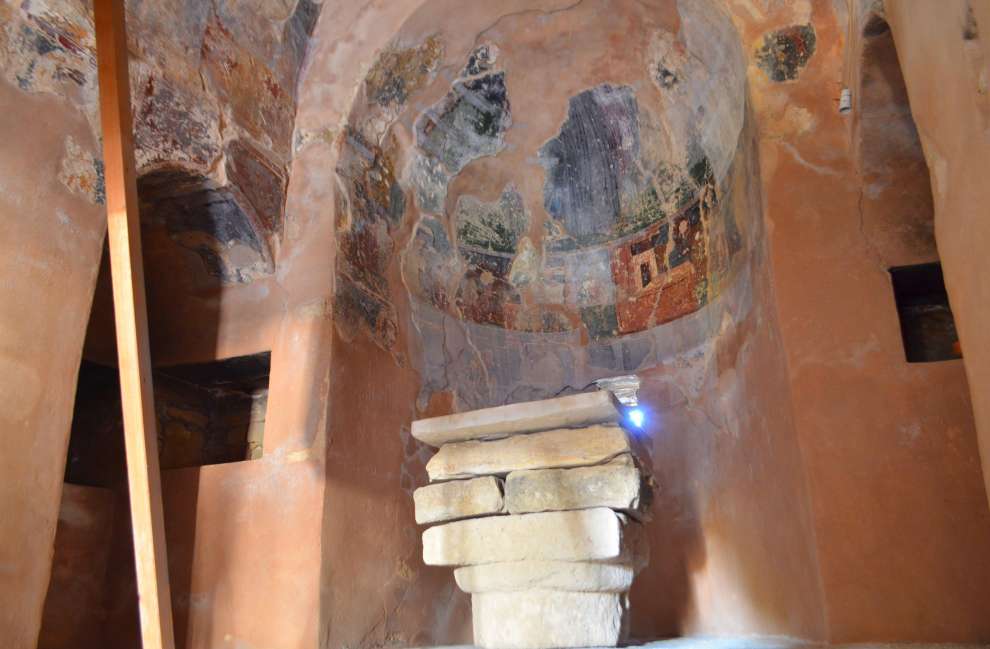 During the 7th century and later, when the island was under constant and fierce attacks by pirates and Arabs, the then monastery was looted repeatedly.The monks, then to protect themselves, dug a small cave on the opposite bank and on a vertical rock, which is covered with dense vegetation and it is almost impossible to observe it, where they lived there during the difficult hours.In peacetime this cave was also used as a hermitage.

This walled cave is rumoured to have been the first enclosure of Agios Neophytos, before being transferred to its last enclosure located next to the homonymous and majestic monastery that bears its name, just above the community of Tala.

During the years of Frankish rule the monastery was in bloom. Although we know that the persecutions of the Cypriots by the Franks and the Latins were frequent, however, a settlement is created around the monastery of Saints Constantine and Helen, although in the surrounding communities lived conquerors.

The new inhabitants of the monastery complex were now engaged in olive growing and animal husbandry, taking advantage of the natural characteristics of the surrounding area where they consisted of the constant running water that flowed through the area and the fertility of the area.

Visiting, today, no one will see any settlements but also livestock units except the chapel dedicated to Agios Konstantinos and Eleni as well as a pile of scattered limestone slabs in its surroundings. This is because the stone years that Cyprus spent during the Turkish occupation the monastery complex and the surrounding settlement are completely destroyed by the atrocities of the Ottomans. Even the frescoes that adorned the interior of the temple were not spared from the destructive fury of the Turks. 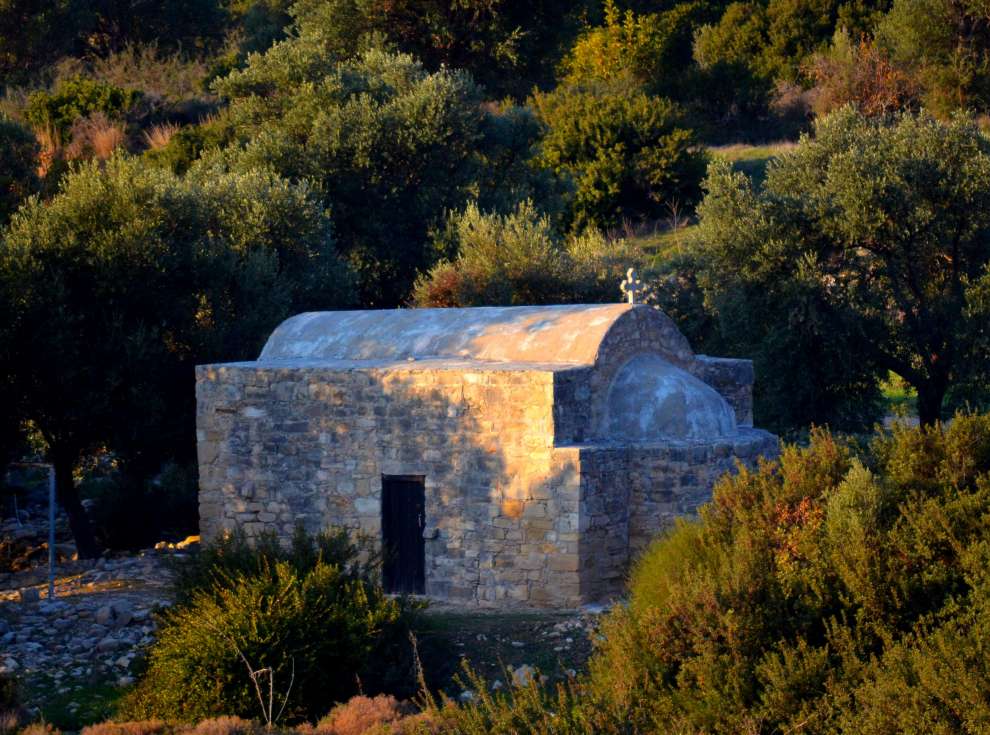 For the record, it should be mentioned that this particular temple from the period when it was looted by the Ottomans until the later years of the English rule was used as a stable and a stable area for herds of Turkish Cypriot farmers of the region.

Fortunately, however, a few years ago and under the guidance of the Department of Antiquities of the Cypriot Government, the chapel was repaired and maintained. So is the cave on the opposite bank of the river, but access is still almost inaccessible.

The chapel is always open to visitors while the cave is locked and its visit is allowed only after consultation with the officials of the Archaeological Site of Koukles who also have the key of the door that leads to this cave.

This place really is not to enjoy the purity of nature that surrounds the chapel. It is a monument with a long history that runs the risk of remaining unknown to the general public and in the end abandoning all efforts to maintain it.

That is why we emerge it not only as a destination for a one-day excursion but also to become more widely known to the Cypriot and foreign public who want to give an appointment with the local Christian history of the region.