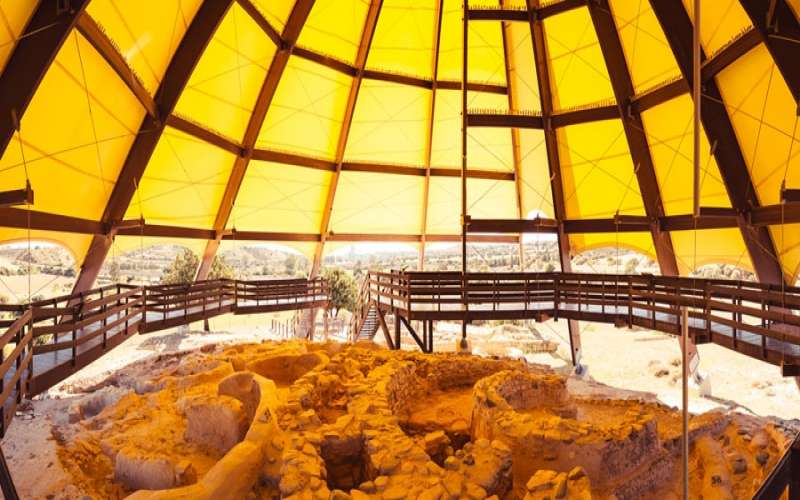 The Neolithic Settlement of Tentas is a short distance from the village of Kalavasos. It is situated in a naturally fortified location to the west of the Basilicos river, about 38 kilometers southwest of Larnaka and 45 kilometers south of Nicosia. This settlement, together with Choirokoitia, is an example of an early permanent population settlement on the island during the Neolithic period (7000-5200 BC). The area is called Tenta on the map of Kitchener (1882) of Cyprus.
The name of the site according to the local tradition dates back to 327 AD when St. Helen, the mother of Constantine the Great, stayed in a tent - "Tenta" during her visit to the island of Cyprus and then during the discovery of the Holy Cross in Jerusalem. It is also said that it had reached Basilico and traveled to the valley in a Tent.
The settlement of Tentas was discovered by the then regiment of the Department of Antiquities, Porphyry Dikeo, in 1947. After the excavation of 1947, the area of ​​Tentas had received little attention. In the summer of 1976 the Basilicos Valley program began the most recent series of excavation campaigns. In 1976, the research program of the Basilicos valley was commissioned by the American Archaeological Mission of the University of Brandeis under the direction of Professor Ian Todd, who excavated the settlement of Tentas. Excavations took place every summer from 1976 to 1979 while a final excavation took place in 1984.
The settlement of the Neolithic Age is surrounded by a fence wall and consists of a set of buildings with a main feature being a circular plan. The top of the walls were made of straw, clay, bricks and pebbles, while the bottom visible today (2018) is stone. The roofs were mostly flat. Inside the houses there were fireplaces and stone-built rigs, while the internal walls of the houses were covered with clay, which in some cases had written decorations on them. It is worth mentioning that the extremely rare decoration of a building, distinguishing two human figures with raised hands, is of special interest.
The nutritional needs of the residents were covered by livestock farming, agriculture, hunting and harvesting of wild fruits while the tools they used were made of stone and bone. The inhabitants of Tentas, as well as the inhabitants of Choirokotia, used a hard stone, the crossing for the construction of stone vessels. As for the jewels, the inhabitants used a greenish soft stone that is abundant in the bed of the river Kouris, to the west of Limassol called the pictorial.
The dead were buried in pits that were opened on the floor of the houses or in the open space between them.

The settlement of Tentas was suddenly abandoned, as did other settlements of the same period, but the causes of this abrupt abandonment were not yet established at the end of the 6th millennium BC.
In the period 1994-1995 a pyramidal roof was built over the settlement of Tentas for protection against weather conditions. A typical cone-shaped roof, which is a contemporary architectural intervention in the landscape.
Working hours:
September 16 - April 15, Daily: 08:30 - 16:00
April 16 - September 15, Monday - Friday: 09:30 - 17:00
Closed on weekends and public holidays
Entry price: €2,50
For groups of 10 or more people, there is a 20% discount in the entry price.
The Department of Antiquities can issue special entrance cards for all museums and ancient monuments: (1) One-day card - € 8,50, three-day card (3) - € 17,00, seven-day card - € 25,00.
For Senior citizens the price is € 1.25.
Working hours and entry fee are subject to change without notice, so it would be wise for visitors to confirm them before they visit.