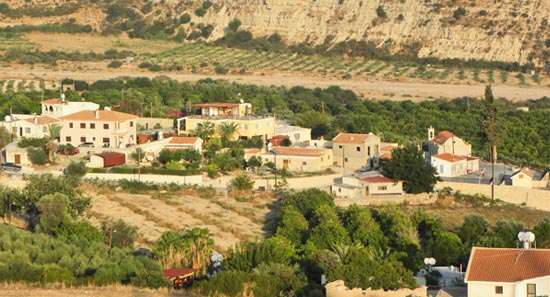 The village of Nicokleia is 17 kilometers southeast of Pafos and is the first village on the way to the mountainous resorts of Cyprus and Troodos. It is built at an average altitude of 80 meters on the west bank of the Diarizos River in a beautiful natural landscape. West of the village and within a short distance is the Asprokremmos dam.

Nikokleia, according to the tradition, took its name from Nicocles who was the last king of the ancient kingdom of Pafos and had his palaces in the village. The village has experienced many fluctuations in its population. In the 2001 census, its inhabitants were 105.

A feature of Nicokleia's community is the large variety of birds, reptiles and butterflies that exist in its area. Several birdwatchers, reptilians and entomologists visit the area for study of the above species. Several foreign and Cypriot tourists visit the site to admire the unique species in the area.

The old church of the community, dedicated to Agios (Saint) Dimitrios and located near the Diarizos River, is built in the 18th century. It is built with stone of the area. It is worthwhile the new temple of carved wood.

A visit to the old watermill and the old village fountain will take you back to the old days where the inhabitants of the surrounding villages came here to grind their wheat.

In the small picturesque square in the center of the village you can relax in the 3 small cafes that have been operating for several years. The hospitality that the inhabitants of the village will offer you generously will be engraved in your memory forever.